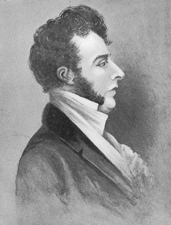 In 1807, a brilliant, creative, and controversial American by the name of Robert Fulton declared his intent to build an experimental “steamboat,” which would be used to initiate a continuous passenger service between New York City and Albany, New York.  With the success of his North River Steam Boat, Fulton showed that it was possible for a person to use an artificial power to alter both their location and the amount of time it took to change it.  In so doing, he broke through an enormous psychological barrier that had existed in people’s minds; it was, in fact, possible to overcome Nature to practical effect.

It took a while for many people to accept Robert Fulton’s triumph as the truth.

One man who did not need to be convinced was a sloop captain named Moses Rogers.  He had witnessed the first successful runs of the North River Steam Boat to Albany, and the experience gave him the fever—steamboat fever.

Moses soon became one of the first steamboat captains in history, taking command of one of Fulton’s first rivals, the Phoenix.  In his newly-created profession, Moses learned not only the characteristics of this first high technology, but the peculiarities of a traveling public just getting used to a “new mode of transport.”

In the years immediately following Fulton’s success, running these steamboats on rivers, lakes and bays became a normal and accepted part of American life.  But taking such a vessel on a voyage across the ocean was a different proposition altogether.  Experienced mariners didn’t think it could be done.  These early steamboats, they declared, were just too flimsy and unwieldy to withstand the dangers of the deep.

But Moses believed otherwise.  Combining his knowledge of the old mode of transport (sail) with the new mode of transport (steam), he set out to design a vessel that was capable of overcoming the many perils of the sea.  This craft would be not a “steamboat,” but a “steamship,” the first of its kind.  She was named Savannah.

This presentation will show how Captain Rogers created such a revolutionary vessel … nearly two centuries ago!

John Laurence Busch is an independent historian who focuses upon the interaction between humanity and technology, with a particular specialization in the first generation of steam-powered vessels.  He has devoted years of research to discovering the true story of Captain Moses Rogers and the steamship Savannah. 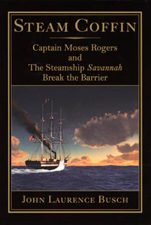 STEAM COFFIN has received positive reviews from over two dozen periodicals based in the United States, Canada, the United Kingdom and Australia.

John has made over 400 presentations on Captain Rogers and the Savannah to a wide variety of audiences, stretching from Maine to Puerto Rico to California, and across the Atlantic Ocean to Europe.