so close to home

A ZOOM PResentation by Michael tougias

Open to GBH Members and All Boating Friends

Join us on ZOOM for a special presentation by our frequent guest and award-winning author Michale Tougias. He has been our speaker at least twice and has presented at District Conferences. Most of his books center on people fighting for survival in stormy seas. He recently published So Close to Home, concerning a freighter carrying cargo and a few passengers, including the Downs family, from South America to New Orleans in early 1942. Unknown to most citizens, German submarines had just arrived off our coasts and one torpedoed the ship as it neared home.

On May 19, 1942, during WWII, a U-boat in the Gulf of Mexico stalked its prey fifty miles from New Orleans. The submarine set its sights on the freighter Heredia. Most onboard were merchant seamen, but there were also civilians, including the Downs family: Ray and Ina, and their two children. Fast asleep in their berths, the Downs family had no idea that two torpedoes were heading their way. When the ship exploded, chaos ensued―and each family member had to find their own path to survival.

This inspiring historical narrative tells the story of the Downs family as they struggle against sharks, hypothermia, blinding oil, drowning, and dehydration in their effort to survive the aftermath of this deadly attack off the American coast. 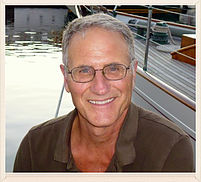 Michael J. Tougias is a NY Times Bestselling author and co-author of 29 books. A versatile writer, he has been published in almost every category including history, young adult, humor, nature and historical fiction. He is best known for his seven survival at sea books such as A Storm Too Soon, Rescue of the Bounty, Fatal Forecast and The Finest Hours, which was made into a major motion picture by Disney starring Casey Affleck and Chris Pine. Tougias’s first maritime book, Ten Hours Until Dawn, a true story of heroism off the coast of Massachusetts during the Blizzard of 1978, was selected by the American Library Association as one of the “Top Books of the Year” and described as “a white-knuckle read, the best book of its kind.”

Always in high demand as a speaker, with the advent of COVID-19, Tougias has expanded his presentation skills to virtual talks. Sharing his screen over ZOOM, he continues to lace his comments with compelling photographs and visuals.  “I enjoy doing these programs,” says Tougias, “because I like to transport the audience into the heart of the storm so that they ask themselves ‘what would I have done.’ It’s like watching a movie with the author giving behind the scene details.” Signed books are available directly from Tougias. The presentation is suitable for all ages.

Tougias, known for his fast paced writing style and character-driven stories, has written several true survival thrillers, including Above & Beyond: John F. Kennedy and America’s Most Dangerous Spy Mission and other sea sagas. On a lighter note, the author penned the award-winning memoir There’s A Porcupine In My Outhouse: Misadventures of a Mountain-man Wannabe. His latest two books are a World War II survival story titled So Close To Home and a book about the Cuban Missile Crisis titled Above & Beyond.