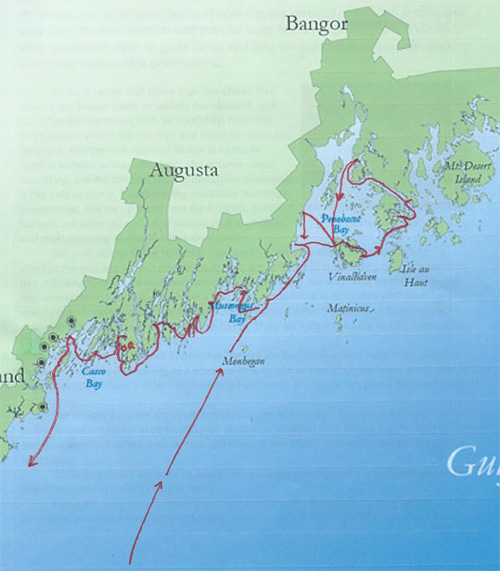 GUNKHOLING is a boating term referring to a type of cruising in shallow or shoal water, meandering from place to place, spending the nights in coves. While not necessary, gunkholers typically seek out the serenity of isolated anchorages over the crowds of marinas and popular bays, and a minimal draft is preferred, since gunkholers tend to go as far up and into the gunkholes as possible, seeking ever more inaccessible destinations.

It’s no surprise that many top-ten cruise lists include the Maine coast, especially Penobscot Bay. It has all amenities towns such as Boothbay, Rockland and Camden, where the marinas and shore facilities are excellent. But the real magic of Maine is found in smaller harbors where moorings, and in some cases anchoring, are the only option. On this cruise anchoring is the only option in five harbors. We must take moorings seven times, and tie up in marinas for 4 nights. Some harbors offer the option of moorings or anchoring, and most mooring rentals will include showers.

Our goal will be to get to Penobscot quickly, then slow down to enjoy the Bay. To shorten the mileage we will not cruise as far as Acadia, but will stay in the eastern half of Penobscot bay including Vinalhaven and Deer Isle. Then we will work our way back west along to Casco Bay and the mid-ocast, where I hope we can have a two day rendezvous in Boothbay. USPS members who cannot get their boats to Maine can drive in and stay at the hotels that line the harbor. After the bustle of Boothbay, we’ll enjoy some small harbors on our way to Casco. Then we’ll start the long run for home with a night at the storied Isles of Shoals.

As in the past, we welcome all members of the United States Power Squadrons to join us. If you cannot take your own boat or are unsure of how much time you could devote to the cruise, consider crewing for others, chartering or coming by car. See the sections in More Information, below. Please register now to receive updates as cruise plans develop.

Radar is helpful but not imperative. Two of my four Maine trips were made with no radar. As we will be travelling as a group, as long as one or two of us has radar we should be in good shape. A chart plotter – with updated charts – is very useful, plus a backup handheld just in case.

Maine’s lobster pots are annoying and do require a sharp eye. There are 3,000,000 of them, found in up to 200-foot depths. In addition they often have a toggle – a second line and float attached to the first. But we will educate any Maine novices on proper avoidance techniques.

Rocks and shoals seem to be everywhere but are usually well marked. Just be sure to pay attention and keep a chart at hand.

Pump out facilities are much improved over the last few years. As long as you can get by with as much as three days between pump outs you should be fine. In Maine a $5.00 fee is the norm.

Someone once told me that the most dangerous thing to take on a cruise is a firm schedule. So while this looks good on paper, flexibility and good communications will insure a successful time for all! How the cruise is likely to shape up:

I know there will be a few of us from the Cape and RI making the trip, so we will officially start from the Sandwich Boat Basin at the east end of the Cape Canal. If weather permits we will make an overnight passage of about 135 miles, with the intent of passing close by Monhegan Island on Monday morning and settling into Tenants Harbor by early afternoon. I have put in eight or nine harbors that were not included on the 2015 cruise, but have included stops in Camden, Rockland and Boothbay – which offer extensive shore side amenities. I hope that some members will drive to Boothbay for the August 4 and 5 weekend as they did in 2015.

Planning is in early stages. We will post more details – including docking/mooring suggestions – as they become available.