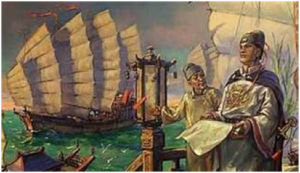 BOAT TALK • China’s Treasure Fleet  James Holmes will enlighten us on the fascinating but little known voyages of Chinese treasure fleets. Over a period of almost three decades in the early 15th century, Ming China sent out a fleet the likes of which the world had never seen. These enormous treasure junks were commanded by the great admiral, Zheng He. Together, Zheng He and his armada made seven epic voyages from the port at Nanjing to India, Arabia, and even East Africa.

James Holmes is a professor of strategy, the inaugural holder of the J. C. Wylie Chair of Maritime Strategy, and a former visiting professor of national security affairs at the Naval War College, Newport. A former U.S. Navy surface-warfare officer and combat veteran of the first Gulf War, he served as a weapons and engineering officer in the battleship Wisconsin, engineering and firefighting instructor at the Surface Warfare Officers School Command, and military professor of strategy at the Naval War College. He is the last gunnery officer in history to fire a battleship’s big guns in anger.